Good early Black Friday morning! I hope you and yours had a wonderful Thanksgiving together yesterday. We feasted on three meats, a ton of veggies, and so many desserts it made your teeth ache. Man, it was some good eating.

I've never been a huge fan Of Thanksgiving, but with every year I get older I understand it a bit more. It's all about the blessings.

As I spoke to my aunt, we remembered the last several:  two Thanksgivings ago, my Dad was starting his treatments for bladder cancer. Last year we celebrated that he was cancer free for the moment.

This year, her family has experienced some very difficult times, including almost losing my cousin due to childbirth complications, among several other things. My sister had emergency surgery that scared the stuffings out of us. I was sick with an unknown issue that resulted in close to a dozen dr appointments and endless tests. So we've seen some fear and stress. But God never left our side and loved us through every moment. If one thing has changed this year, it's a stronger faith for many of us.

Not too long ago- a year maybe two- I was in a financial mess. I tried to cover all the bills but there wasn't enough money to go around. At the end of the month, I had $33 to buy clothing, go out to eat, buy stamps, buy birthday presents, etc. it was tight.

My sister came over for a visit and as she was leaving I walked out on the porch with her and sat in my glider.  I heard an odd noise but thought nothing of it. She kept looking at the glider with a puzzled look and finally came up on the porch and pointed to a plain white envelope stuck in the arm of the glider.

It was weathered. Had been rained on and dried, the flap was halfway peeled up. It had been there for a while. Inside was a $100 bill. Yes, I was a bit freaked out and no one would claim responsibility for doing it. Everyone said they weren't crazy enough to leave money where the wind could blow it away. But here was an answer to a prayer.

My sister and I have talked about how things will happen like that. They'll have a random surplus of money and it's the exact amount someone needs to pay an unexpected bill. Or they'll receive a random return where they over paid and it will cover some need.

God is good. He loves us and wants to take care of us. We sometimes need reminders that He's in control and when we begin thinking we are running the show is often when He'll remind us we aren't. Then we come to Him asking to help :) it reminds me so much of Macy. She's at that stage when she can do it herself. But the first sign of struggle she's coming back to one of her loved ones asking for help and comfort.

I know this is a ramble and I'm sorry about that. Blame it on the food coma that has my brain floating in gravy. Hugs to you, hope you are still feeling the Thankful this morning and have a great Black Friday. :)
Posted by Beth at 6:27 AM 2 comments:

Last week we finished up the book we were studying in Sunday School and were asked what we wanted to move into next. You know how that goes... *cricket cricket*

I whispered to my sister that I would really like to do an in-depth study of the Christmas Story. And thankfully she spoke up and away we go! Today began the first lesson and it started from the beginning - Jesus' lineage on both His earthly father's and Mother's side.

I'm so excited about this series, I'm chomping at the bit to go to Sunday School. I'm excited to learn more about one of the most important dates ever in history. About the most important man. The hope and joy from His birth! Eiik! Excited! Buying a notebook for my notes. :) 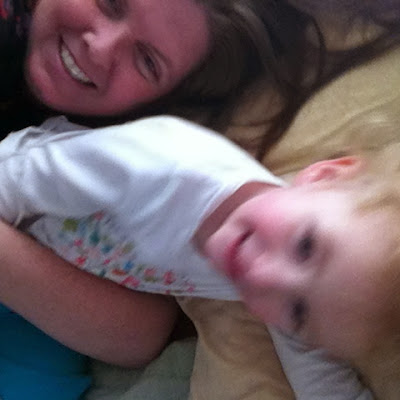 My weekend in general has been out-of-sight! Took off Thursday and played with Macy all day.

Then on Saturday I kept her ALL DAY so my sis and her hubby could find a new dryer. Did I mention all day?  Like 9 am until 6 pm? And that child kicked my booty. That pic above would be tickle fights instead of napping. :) 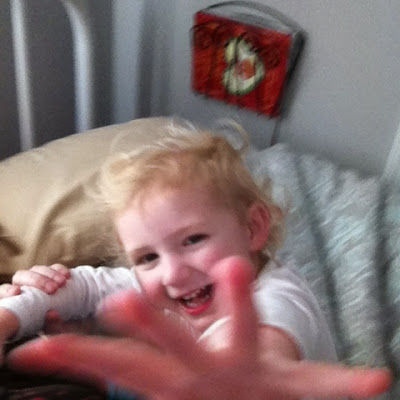 Heehee. We really did have a great time together. Did a little shopping - supplies to learn how to quilt. I've finally decided to just mix te fabric I have here because SERIOUSLY how good is this going to turn out on my first attempt??? Yyyeeeaahhh

Ok so there is a Sunday night ramble for you. :)  off to watch some music awards and then head for bed to get ready for Monday :)
Posted by Beth at 9:23 PM 1 comment:

Happy happy joy joy - It's Friday! I took yesterday and today off and have thoroughly enjoyed my down time :) and I got good news at the cardiologist today woop woop!! Visited with a friend, spent way too much money in Hobby Lobby... Life is good! So y'all pull up your chairs and let's dive into Friday's Letters! 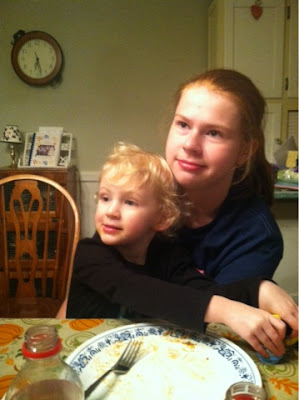 Sweet Nieces, y'all are so adorably cute. :) exhausting and a handful-both of you!!! But I love y'all very much and I'm so proud of you! 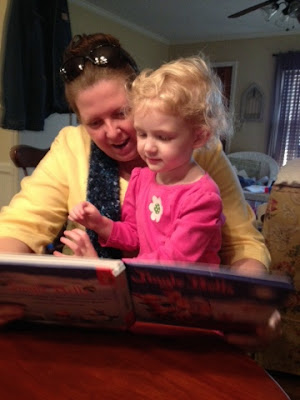 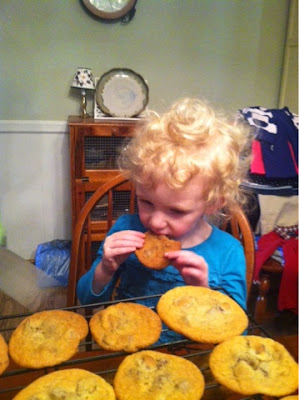 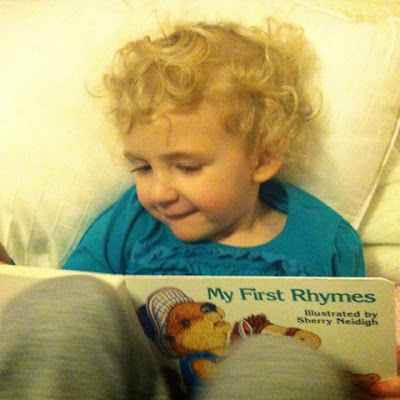 Baby Sweet Niece, I get to spend more time with you because you are here full time. This week you've been super sweet and loving and challenging. We've read books, played blocks, princesses, fought over picking up, experienced how stubborn you can be... Oh my. But you are such blessing. 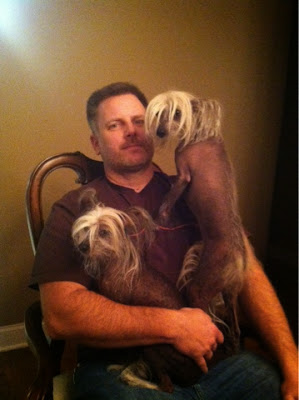 Dear brother and sister-in-law, thank you for inviting me over for supper!  It was great to just kick back and catch up. And the dogs were great entertainment. :) 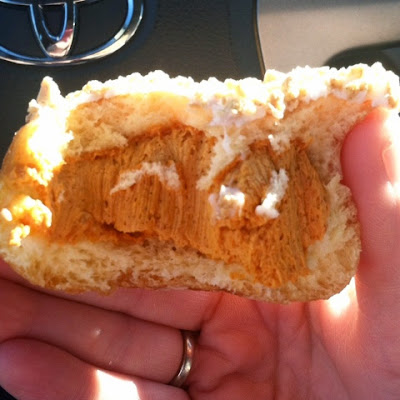 Y'all, I'm so happy most of my shopping is behind me. I'm wanting to visit Santa with Macy, see Christmas lights, send cards and dive into this in-depth study of Christmas in Sunday school. Very excited. :) :) :)  I hope your weekend is a good one! *salute!*
Posted by Beth at 10:53 PM 1 comment:

Good Morning, Friends! It's actually Saturday, six something in the morning, and I realized I didn't post my letters for the week. Bad Bethie. I was so excited to see Shrek the Musical with friends that I completely forgot. Heck, I was so excited to see friends because I haven't seen anyone outside of work and family for about a month?? Crazy. Anyway, shall we start? 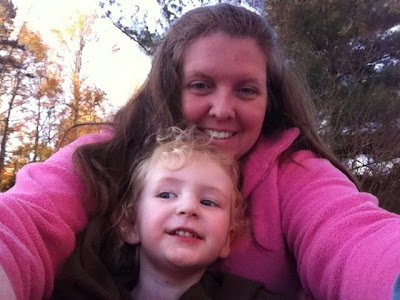 Dear hay ride, so ok, you didn't have hay, a tractor, or a trailer, but to a two year old the back of a truck is just as good. Well keep calling you hay ride, because you make baby niece happy. Not sure truck ride would be as amazing to her ... 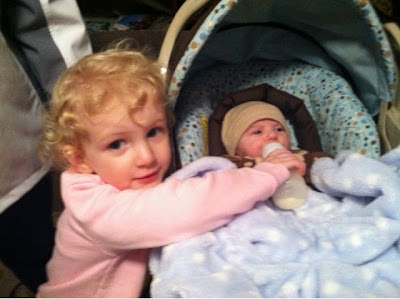 Dear Baby Gates, you are a total cutie and such a sweetie!  Snuggled into my mama-your great aunt- and totally made her day. Then you woke up and took a bottle from Macy! Ok the two of you stole my heart. 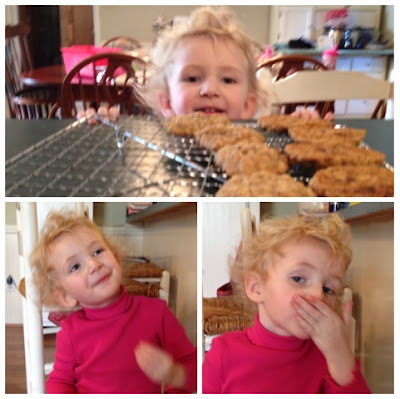 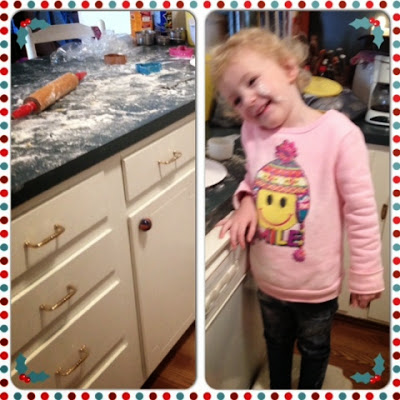 Dear Mama, you are so good with Little Miss. She learns so much from you because you are willing to take time and teach her. And I know it adds to your work to have a toddler in the kitchen, tossing flour in the air as she says, "It's snowing!!!"  You are the best grandma ever. 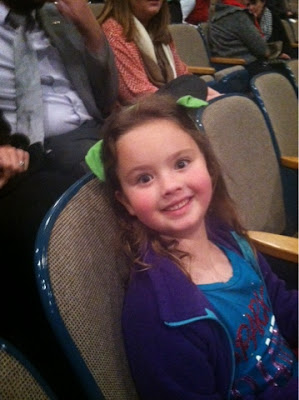 Dear Ellie Bellie, I have missed you! I haven't seen you in a month of Sundays! You did so well in the play - I think you like the movie. We'll have to see if we can find it. Because I think you missed the part about Fiona becoming an ogre ... It was a little too late for you :) ZZZZzzzz... 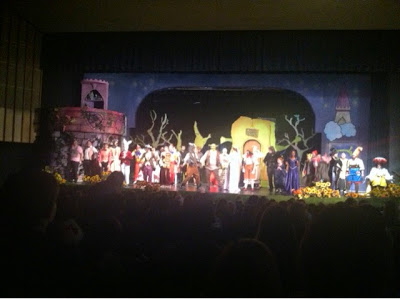 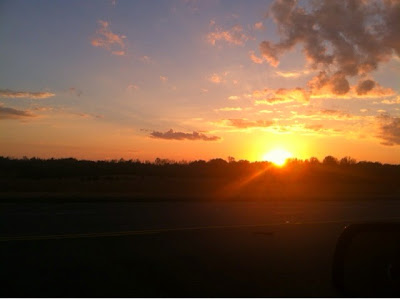 Dear God, You are so good. Thank you for the friends you've given to me, the family you've made me part of and for the support you surround me with. You know there are prayer requests on the table- for family and friends. You see the situations, You know the plan and You will provide what is needed. Please help us all have greater faith in You.

Well friends, I suppose I should get moving and start my day. Mom and I are shopping, tying to start on Christmas :)  I hope you have a beautiful weekend and come back to visit soon!
Posted by Beth at 6:35 AM 1 comment:

Sweet Niece #2 came over to play at my house and I just had to share these photos from today. Hope you are having a great weekend!! 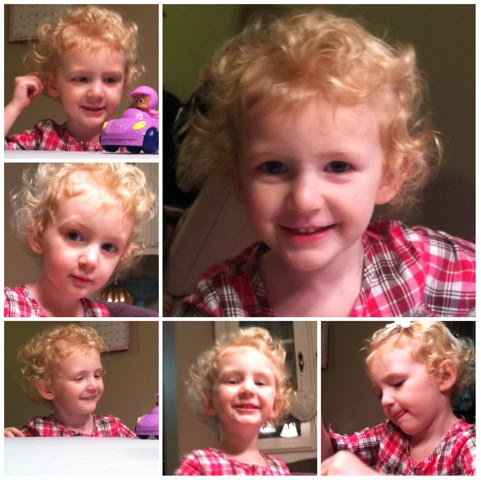 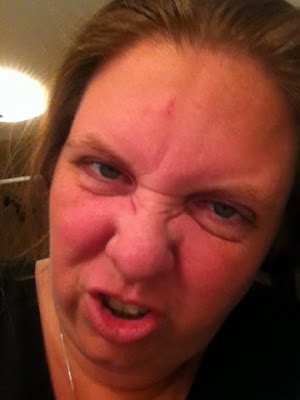 Dear toner cartridge, yes I know you tricked my short coworker into thinking you were secure on the top shelf. I know you waited for me to come in and peruse the paper selection so you could knock me unconscious. You almost succeeded. You gave me a serious headache. Now let's see if you give me two black eyes, as well. 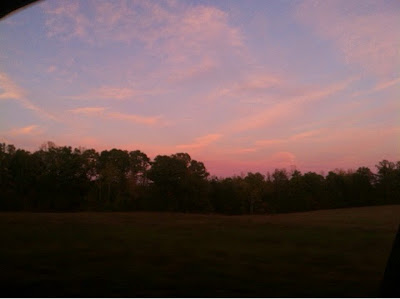 Dear Autumn, I'm so thankful you are here. I love your sunrises and sunsets. Your colors make me oh so happy. And seeing the sun set on my way home from work totally rocks.

Dear Facebook, deleting your app from my phone has freed up so much space for more sweet nieces photos. No regrets. 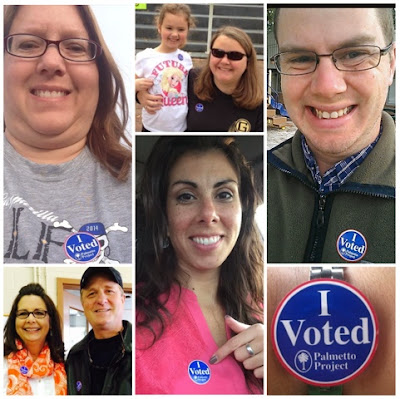 Dear Election, I'm so happy you are over and certified! Seeing everyone's sticker photos made you a little easier to endure, because people voting is what is all about. Wait, what do you mean we have a January election!??!? Argh! 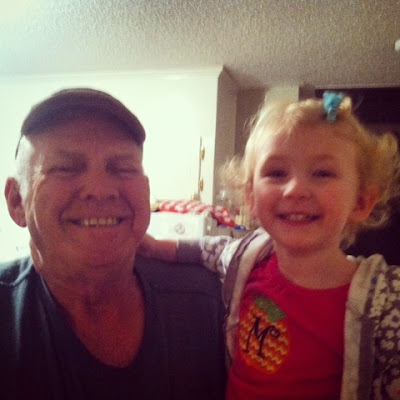 Dear Sweet Niece #2, you've had us worried, little girl. Four doctor visits in three weeks is a little extreme. Seeing thi smile tonight made me so happy - hopefully it means you are feeling more like yourself.

Dear Sweet Niece #1, the stomach bug?? Heaven help, I hope you are recovering. My heart broke a bit for you when you were unable to try out for basketball. Hopefully another sport will work out. 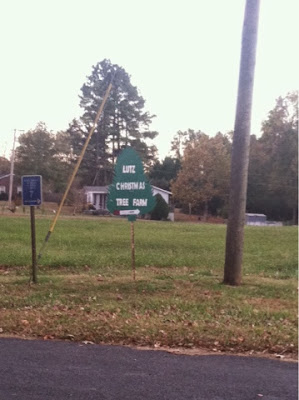 Dear tree farm, I got a little excited when I saw your sign this morning!!! It's beginning to look like Christmas!!!! Yay yay yay yay yay!!!

Tomorrow is a great pottery show so I'm heading there. Then I promised Macy she could come over and jump on my bed. So now I must sleep so I can prepare for hyper little miss! ;)

Letters on a Monday

I think this makes 22 days of work in a row, so don't be surprised if this is a rambling typo-filled mess :) 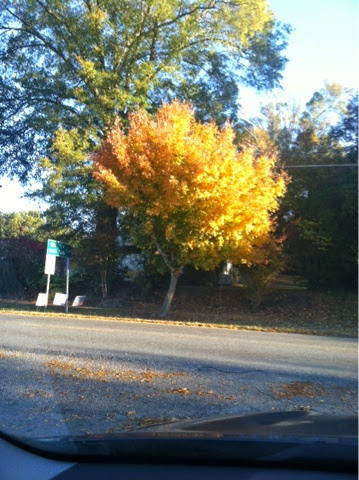 Dear Autumn, I'm glad you are finally here. I'm not crazy about your cold temps but so far I'm still chillin' in flip flops. Even as I scrape ice off the windshield... 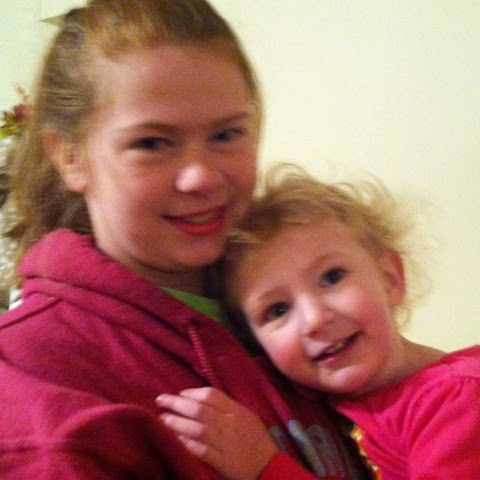 Dear Sweet Nieces, it made me so very happy to see y'all for all of 15 minutes this week. You were both still half asleep but so adorably cute! I love you both much!!! 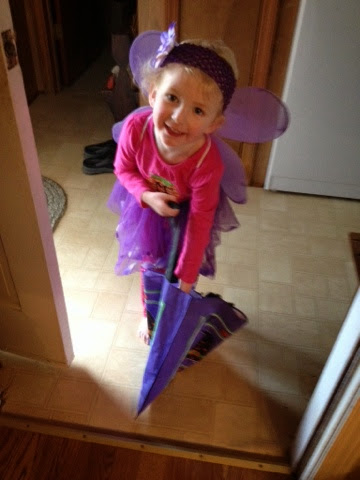 Dear Sweet niece #2, going trick-or-treating with you was so much fun!!! You were so excited to be around other kids that you didn't really care about the candy. :)

Ok y'all I'm falling asleep you know I won't been around here for a while long. Get out and vote!!!
(I actually typed this up late last night and fell asleep before I could post it. Oops!)

Beth
A sweet Southern gal. I'm blessed with wonderful family, including two sweet nieces, friends, and an appreciation for the little things. A child of God and continually learning His path for me. Check out my profile to learn more!